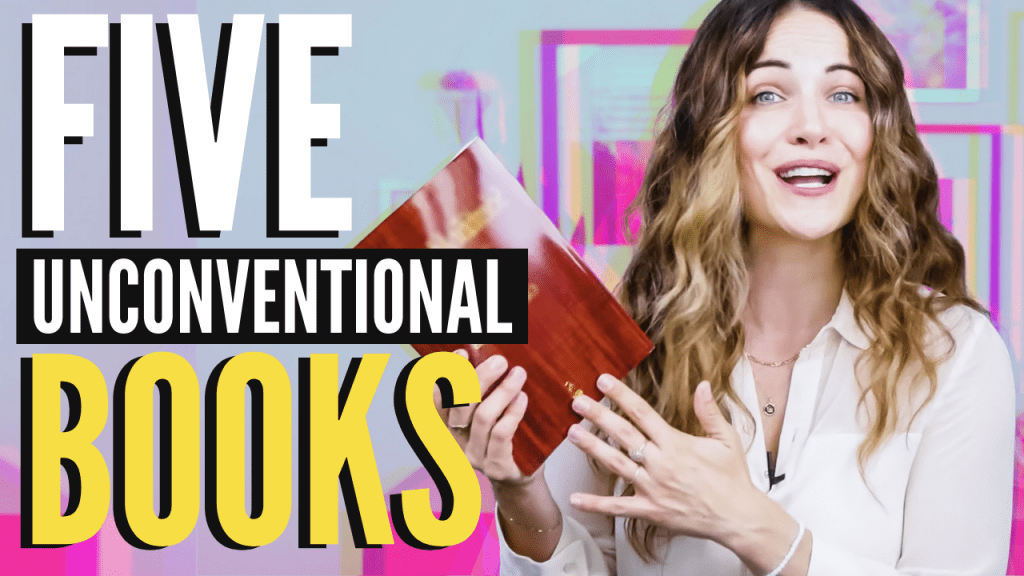 5 Unexpected Copywriting Books That’ll Give You A Persuasive Edge

Back by popular demand! Here is my latest list of the 5 most UNEXPECTED copywriting books you should read immediately to give you a persuasive edge.

What’s up guys, it’s Alex. I’m super excited about this article because it has been a long time coming…

Back on February 13, 2019 I released my FIRST YouTube video on 5 copywriting books for beginners…

That eyeliner though. lol

Now, a year and half, 74 episodes and 53,000 subscribers later, it has become one of my most watched videos.

So, it’s really no surprise that many of you have asked me to do a part 2 of more must-reads to sharpen your copywriting skills!

Well, since there are already tons of lists out there on the copywriting and marketing books you should add to your bookshelf or audible account, I thought I’d give this list a bit of a different spin.

The books I am sharing today were not specifically written for copywriters or marketers, BUT I promise they will give you a massive edge when it comes to your writing because you’ll get mind blowing insights where no one else is looking.

I’m obsessed with history, science, psychology, true crime and philosophy. I geek out on studying the intricacies of the human condition, including the hidden and fascinating motivations behind why we act, feel and buy the way we do.

And, really, having the ability to understand what guides behavior is the holy grail of copywriting. After all — it’s your job to predict your prospects needs and compel them to take a specific action with your words.

So today, I’m giving you a little peek into my crazy brain and giving you 5 NON-copywriting books you need to read immediately to give you an undeniable edge in your communication and persuasion.

And, if you want more tutorials on how to get inside the mind of your customers and write more compelling copy — join my global posse by clicking the subscribe button over on my YouTube Channel. And don’t forget to ring that bell to be notified when my next video goes live.

Now here they are, 5 unexpected and unconventional copywriting books for you to read next.

1. Payoff: The Hidden Logic That Shapes Our Motivation By Dan Ariely

Dan Ariely is not only a professor of psychology and behavioral economics, he’s also a renowned TED speaker and author of several bestselling books, including Predictably Irrational – which made my first list of must-read copywriting books…

In Payoff, he gives you an invaluable guide to human motivation — whether you’re looking to motivate yourself, the people you live with, work with, or interact with on a daily basis.

The truth is, most of us are not aware of how motivation plays a role in our decision-making. While you may assume we make decisions transactionally, based on money or some other logical or tangible benefit, it’s actually SO much more complex and meaningful than that.

There are hidden motivational factors – that most of us are partially or even completely blind to – that run our routines and personal narrative every single day. Do you know what they are?

For example: What role does trust play in motivation? What are your misconceptions about how to value your work? How does your sense of your mortality impact your decisions?

Payoff explores the true nature of motivation so you can be mindful of the choices you make and understand those of others.

Ultimately, this knowledge will help you close the gap between your prospect and your call-to-action by speaking to these hidden motivational factors in your copy.

In my first list of copywriting books to read, I recommended Breakthrough Advertising by none other than Eugene Schwartz, a brilliant and frequently credited copywriter who became prominent in the 50s and 60s.

Well, Claude C. Hopkins was an advertising pioneer who revolutionized the industry in the early 1920s!

His book, Scientific Advertising, has been recommended by advertising geniuses throughout the past century, including the man known as the “Father of Advertising” — David Ogilvy, who said:

“Nobody, at any level, should be allowed to have anything to do with advertising until he has read this book seven times. It changed the course of my life.”

Even marketing legend Jay Abraham claimed that he’s read this book 60 times and felt it helped to launch his career.

In Scientific Advertising, Hopkins teaches you how to tap into basic psychological triggers based on his years of dedicated study and experimentation as a salesman… including how to tell your story, how to apply specificity, how to write compelling headlines, and even how to choose the right images to strengthen your ads.

Originally published in 1923, the language may be old school but the wisdom is still powerfully relevant, because guess what? As Dan Ariely has also confirmed — people’s internal motivators have hardly changed since the beginning of time. Which is what makes this book, and others like it, absolutely timeless.

3. The Tipping Point By Malcolm Gladwell

In my video, 5 Copywriting Courses For Beginners, I included Malcolm Gladwell’s Masterclass as THE course to help you improve your storytelling skills. Why? Because few can present case studies on human behavior as well as this award-winning writer.

In his debut bestseller, he introduces what he refers to as the Tipping Point — that magic moment when an idea, trend, or social behavior crosses a threshold and spreads like wildfire.

This can apply to anything from fashion or music trends to market demands and crime rates, and should absolutely make you giddy with excitement when you think about how this applies to selling products and disseminating ideas.

According to Gladwell, there are three variables that determine whether the tipping point will be achieved: The Law of the Few, the Stickiness Factor, and the Power of Context.

One of the examples he used was Hush Puppies, a shoe brand that was near-extinction but suddenly hit a tipping point in the 90s when a bunch of young hipsters in Soho, New York City started wearing their shoes and sparked a nation-wide fashion trend that shot Hush Puppies sales through the roof.

Such case studies can be seen a lot today especially with the help of social media to spread new fads, causes, and campaigns like wildfire… in both good ways and bad.

4. The Code of the Extraordinary Mind By Vishen Lakhiani

It may not be a book about marketing but it is written by one of the top copywriters and marketers in the personal development field — Vishen Lakhiani, the founder of Mindvalley.

I wanted to include this book on my list, not only because Vishen is a long time friend and former boss of mine, but he was my first mentor and a person who has taught me SO MUCH of what I know today.

His book, The Code of the Extraordinary Mind which I listened to on Audible, makes a case that everything we know about the world is mostly decided not by rational choice – but instead by conditioning and habit.

As a result, most of us have been living our lives based on limiting rules and outdated beliefs about pretty much everything – love, work, money, parenting, sex, and even health.

Inspired by the work of visionaries such as Peter Diamandis, Arianna Huffington, and Sir Richard Branson… this book is also a blueprint of 21st century nonconformity that teaches you how to question, challenge and hack the norm, and create new rules to define success on your own terms.

How does this book help you as a copywriter? Well, with more and more audiences growing frustrated and jaded by the status quo today, The Code of the Extraordinary Mind is a thought-provoking resource to help you understand your prospect’s personal battles, empower them to take action, and better illustrate what their life can look like once they’ve unshackled themselves from the core problem your addressing.

5. Nonsense: The Power of Not Knowing By Jamie Holmes

Don’t be fooled by the title — there is no “nonsense” in this book. Nonsense looks at how humans make decisions when they are in the state of uncertainty. Which pretty much sums up the entirety of 2020.

So how do we choose which path to take when we have no idea what lies in the foreseeable future? In this book, Holmes presents new insights from social psychology and cognitive science on how ambiguity plays a role in our lives, and how we can use uncertainty to our advantage.

From spy games and doomsday cults to Absolut Vodka’s ad campaign and the exponential growth of Zara — this book tells the story of how people often prosper when faced with uncertainty.

Managing ambiguity is quickly becoming an essential skill… especially in the current climate today. Nonsense won’t only help you empathize with your prospect as they consider your offer, but will help you eliminate any objections they might have through your copy.

So that’s it guys — five unexpected books you should read immediately to get inside the minds of your customers, gain a persuasive edge and take your copywriting to the next level.

Now, I want to know… what is your favorite copywriting, marketing or psychology book that didn’t make the list? Comment below and let me know below.

Thanks for reading. I’ll see you in my next post. Until then, I’m Alex. Ciao for now!

Alex Cattoni
Head word nerd and marketing mad scientist at the Copy Posse. I geek out on studying the intricacies of the human condition, including the hidden and fascinating motivations behind why we act, feel and buy the way we do.
Previous Post
A Day In The Life of A Copywriter: Pandemic Edition
Next Post
How To Write Engaging Instagram Captions (6 Copywriting Tips With Examples)