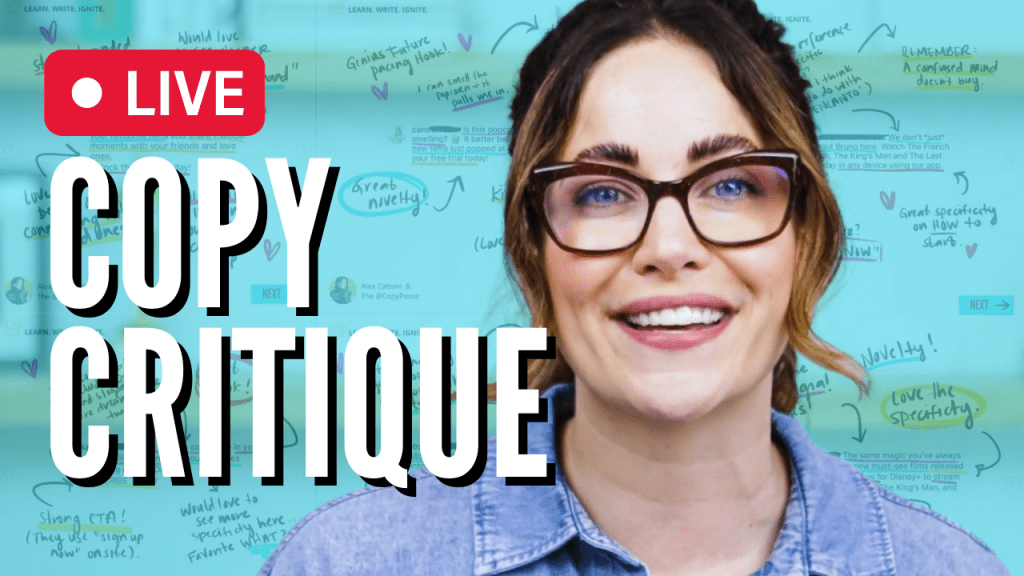 What does it take to write an ad, headline, or subject line that’s impossible to ignore?

I’m about to let you look over my shoulder as I critique 6 Ads on the fly – what made them great, what left me wanting more and what would make them even more powerful?

If you’re following me on Instagram, @copyposse, then you’ve probably seen my regular “Make It Hotter” posts…

Where I find an ad, headline, or subject line – and put it out to the community to, you guessed it,  “Make It Hotter”! 🔥

And, the BEST part of this exercise for me is when I get to put on my Posse Prof spectacles and critique the top-voted submissions.

So in today’s blog, I’m going to take you through one of my latest editions of “Make It Hotter” and break down my critiques of each Ad—point by point.

So let’s get started.

First, let’s take a look at this post – where I asked the Posse community to make this ad even hotter.

This was an ad for the Disney+ App.

Disney+ is home to must-see acclaimed films. The French Dispatch, The King’s Man and The Last Duel are now streaming.⁠ ⁠Sign up. ⁠

But I gotta admit I liked these Posse-fied versions WAY better.

But before I get to my critique of the submissions, first let’s critique Disney+’s original copy… What worked? What was lacking? And what could be better?

Now the first thing I notice is that they’re utilizing a FOMO hook really well here—they say “Disney+ is home to must-see acclaimed films”. So, if you’re a movie buff, then that’s definitely going to get your attention because you want to make sure you’re not missing out on anything good.

And they also dropped a few movie titles that were recently released during the time this Ad was being run…  which is a smart way to use relevancy, and again – FOMO.

But I gotta say that I’m a little disappointed that they don’t call out a specific audience. Even the movies they name dropped are different genres, so there really is no specificity here.

They’re trying to appeal to a general, or broad audience.

And everyone knows that if you try selling to everyone, you end up selling to no one. So I would love to see our Posse get a bit more specific in their rewrites.

Disney+’s CTA is “SIGN UP”. It’s nice and simple, which is what you want your CTAs to be, but I do think they could have found a better way to use a simple CTA that’s a little more enticing.

Overall, this is an Ad that I would say is just “ok.”

But first, here’s a quick recap of my 3-step formula for writing a H.O.T. Headline. A hot headline should…

Alright, so now let’s take a look at the Posse’s submissions – along with my critiques.

These 6 ads were selected for critique because they received the most amount of “likes” or “votes” from the community.

#1 – The same magic you’ve always cherished with new must-see films released weekly. Sign Up Now for Disney+ to stream The French Dispatch, The King’s Man, and The Last Duel.—Bobby 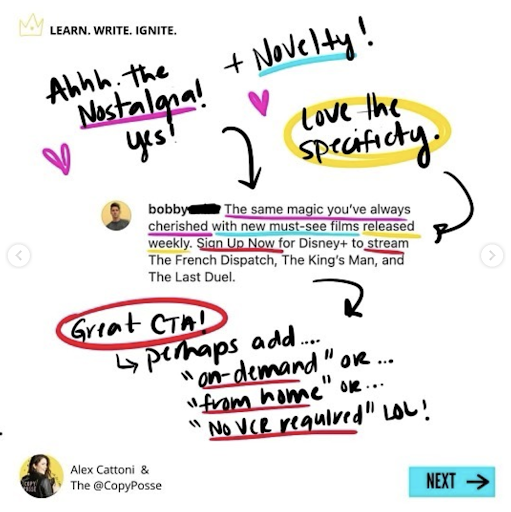 #2 – Dreams really do come true when you’re watching Disney+. Enjoy your favourite films and share magical moments with your friends and loved ones. Unlock the Magic Today!—Kim 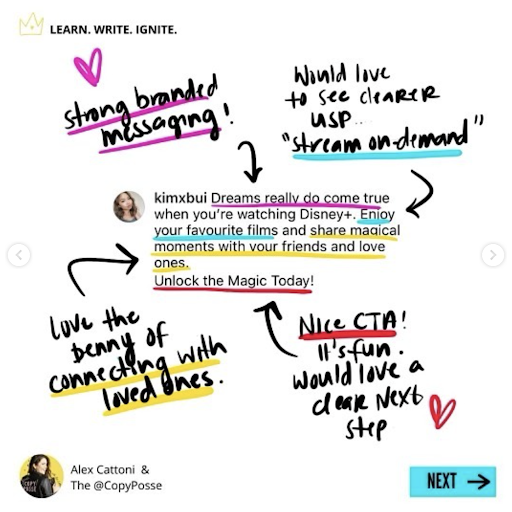 #3 – Is this popcorn I’m smelling? It better be because these new films just popped at Disney+. Start your free trial today!—Carol 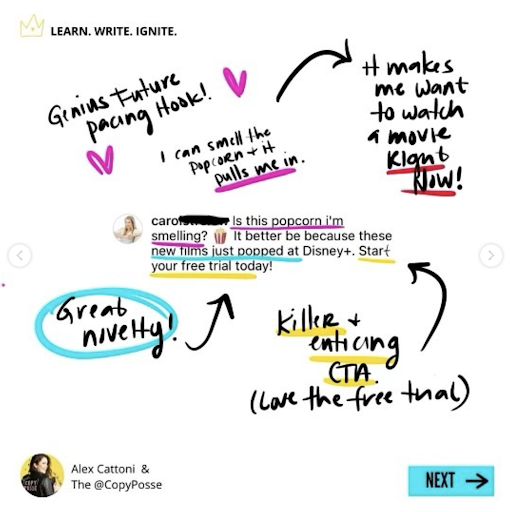 #4 – We don’t *just* talk about Bruno here. Watch the French Dispatch, The King’s Man, and The Last Duel today in any device using our app. Sign up.—Israel 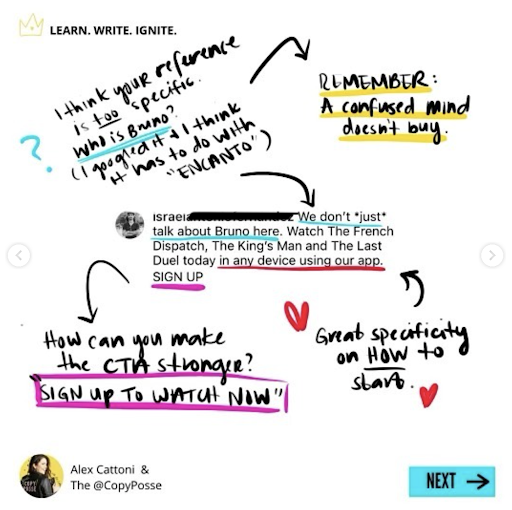 #5 – With Disney+, witness stories that journey around the world and into imagination. Your classic favorites can now become your child’s new favorites—Jose 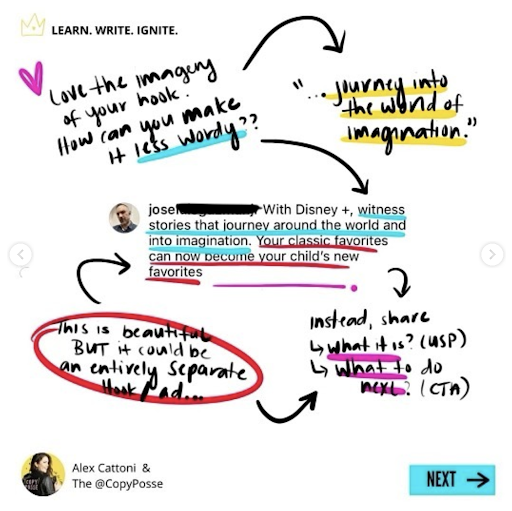 #6 – Make dreams come true in your very own living room. All your favourites streaming now on Disney+. Subscribe today. —Karilynn 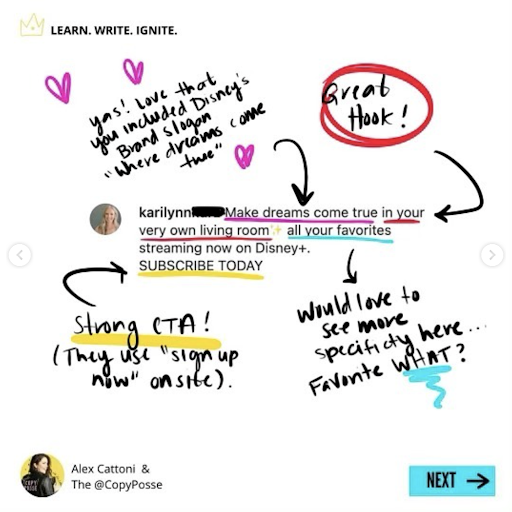 Everyone did such a great job on this exercise.

Now, if you want to play along in the next edition of “Make It Hotter” – be sure to follow me on Instagram at @CopyPosse.

If you liked this blog and want to see more in-depth critiques like this in the future – make sure to subscribe to my newsletter!

And don’t forget to grab a copy of my FREE H.O.T. Headline Guide – so you can learn exactly how to write headlines that grab attention and stop scrollers in their tracks – you can grab that in just a few seconds at the end of this video.

Until next time, I’m Alex—ciao for now!

Alex Cattoni
Head word nerd and marketing mad scientist at the Copy Posse. I geek out on studying the intricacies of the human condition, including the hidden and fascinating motivations behind why we act, feel and buy the way we do.
Previous Post
How To Find Clients The WRONG Way: 3 DEADLY Cold Outreach Mistakes (with Stefan Georgi)
Next Post
Become A Master of Persuasion: 5 Books To Improve Your Storytelling