Let’s talk about PLAGIARISM on the internet⁠… shall we?

What’s the difference? And where do you draw the line?

But first, if you’re new to the crew – welcome!

Here on my blog, you’ll find hundreds of in-depth tutorials on copywriting, social media, digital marketing and more… So be sure to stick around and subscribe to my newsletter below.

Because it really GRINDS MY GEARS and it’s something that’s happening to more and more creatives that I know… myself included. ⁠

Yes – I’m talking about plagiarism. Or, in other words, blatantly stealing other creators’ work online and trying to claim it as your own.

⁠Here at The Copy Posse, we have long stood against things like:⁠

Basically, all forms of internet DOUCHERY…⁠

And I’m fierce as hell about speaking out against it. ⁠

Especially when it directly affects me, my students, or fellow creators who bust their ass day and night to create quality content for their audiences…⁠

Sadly, we’ve gotten to a point where CONTENT SWIPING has become a “normal thing”—especially on social media… ⁠

⁠⁠It has happened to me multiple times (you know who you are) and it’s happened to countless other hard-working entrepreneurs I know. ⁠

⁠It seems like many people simply don’t understand where to draw the line.⁠

So, I’m here to set the record straight… ⁠

Taking creative inspiration is when the only thing you’re “using” is the idea behind the content.

What you write, and how you write it, must be completely different from the original work. In other words… it’s written in YOUR words, not someone else’s…⁠

Because here’s the thing. ⁠

Topics and techniques CAN be very similar, especially within a specific industry or niche…⁠

And let’s be honest, there aren’t a whole hell of a lot genuinely brand new, never seen or done before ideas…

True originality is a tall mission. Just about everything we do, say, and think these days is based on something that came before us – whether we realize it or not.

Sure, there’s the occasional unicorn idea that might truly be the very first of its kind… But even then it likely was inspired by something or someone else.

So if you find a topic, technique or subject that someone else is posting about online – and it really inspires you to create something similar and share your thoughts on it – GO FOR IT!

But do it in your own way. Using your own words. Your own style. Your own opinions. And your own creative flare.

Stealing – or swiping – content is when you’re using more than just “the idea”.

In other words, you’re directly copying the exact words, language, or structure of someone else’s thoughts and opinions. ⁠

Which, by the way, is highly illegal.

Let me give you some examples of full-blown content-stealing that has happened to me recently, over on the Copy Posse IG page…

Now – I’m blurring out the Instagram handles here because my goal is NOT to publicly shame anyone… It’s to call out one of the BIGGEST issues in the online world today and hopefully educate people on the right way to take and share creative inspiration. 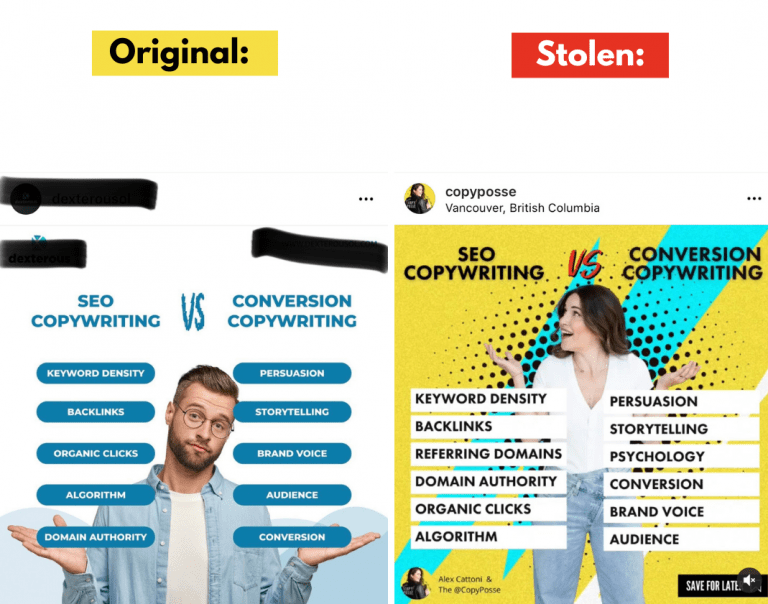 I mean come on… are you freaking serious?! 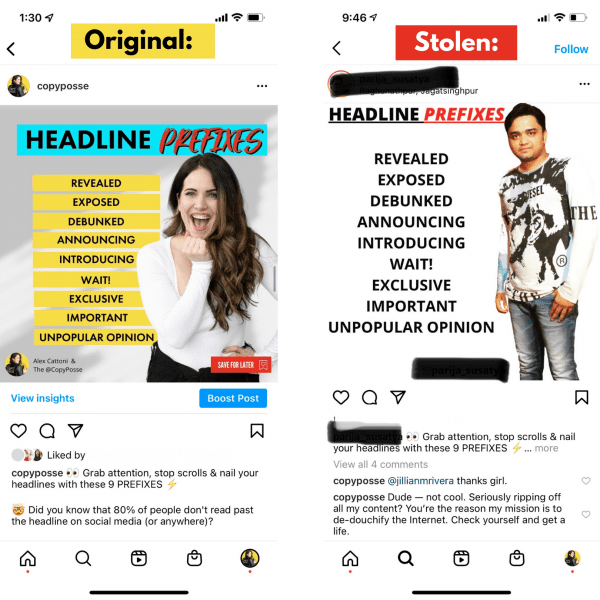 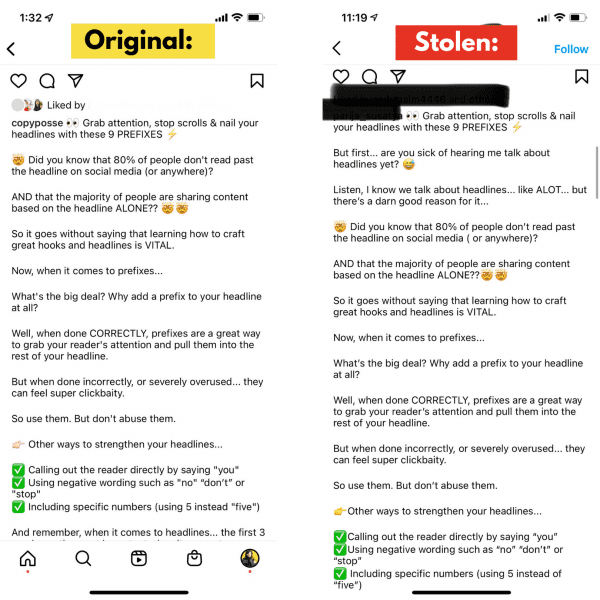 You can see the graphic is using literally the exact same words. And then look at the caption… THE EXACT SAME. Same words, same formatting, the same emojis for crying out loud.

There is no room for debate—this content was stolen.

Oh and he doesn’t stop there…

This particular person swiped MANY MORE of my posts – word for word. 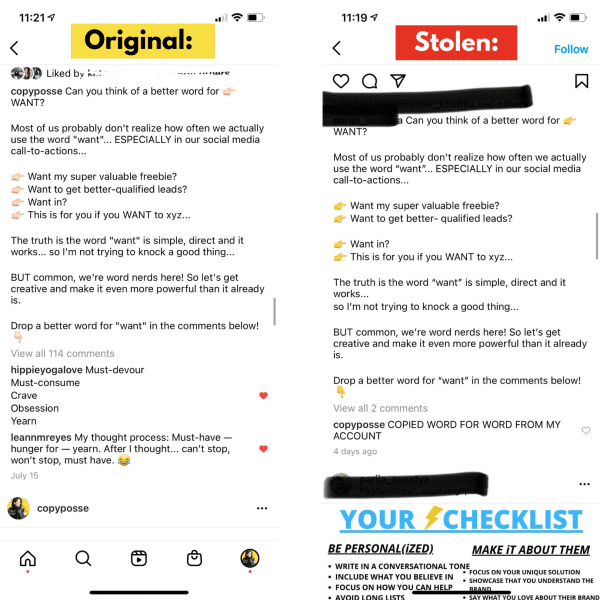 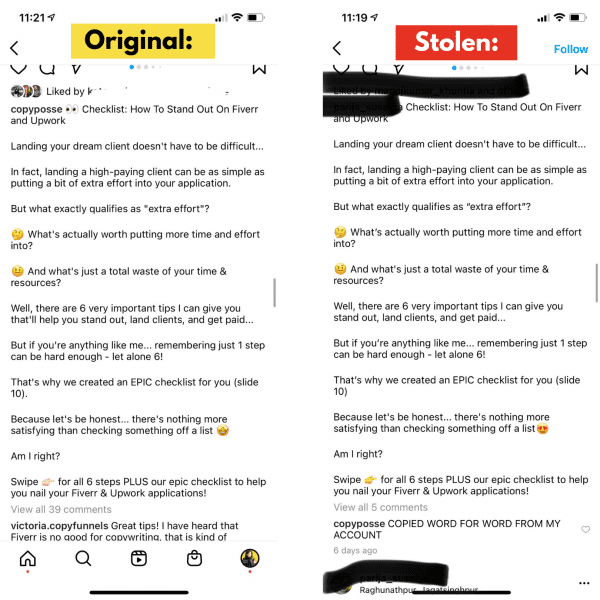 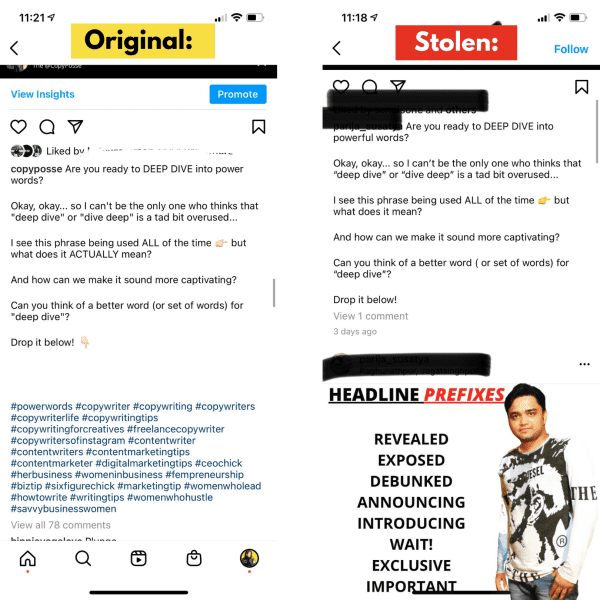 The language used in both the graphics AND the captions were identical – word for word. When I approached this particular person about the blatant plagiarism, he denied it completely…

Saying he “got it from other sources.” Hahaha please.

He even swiped my tagline “Learn, Write, Ignite.”

Now – obviously – it goes without saying that that was CLEARLY plagiarism. But what about the times when it’s not so cut-and-dry? Well, I’ve got some examples for you there too… 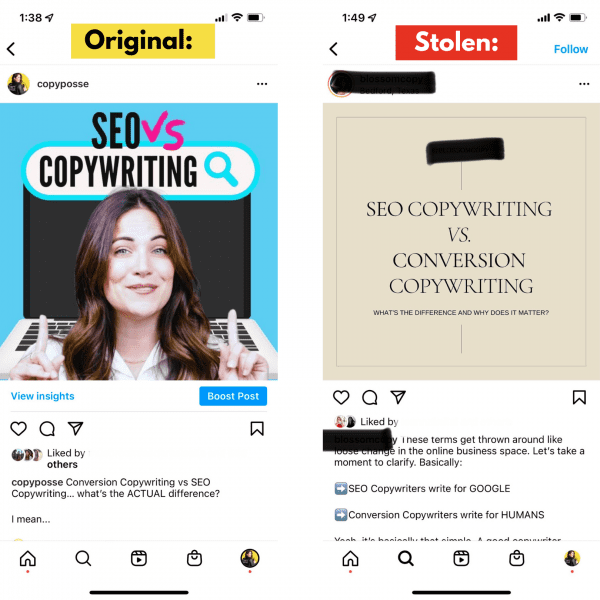 You can see that the captions here are not identical and neither are the graphics – so this passes the plagiarism test, right?

If you were to watch that week’s video, you would see that what I say in the video is exactly what this person has written on their graphic… And her caption is basically just a bunch of slightly reworded lines taken directly from that video.

And here’s another example from the same person. 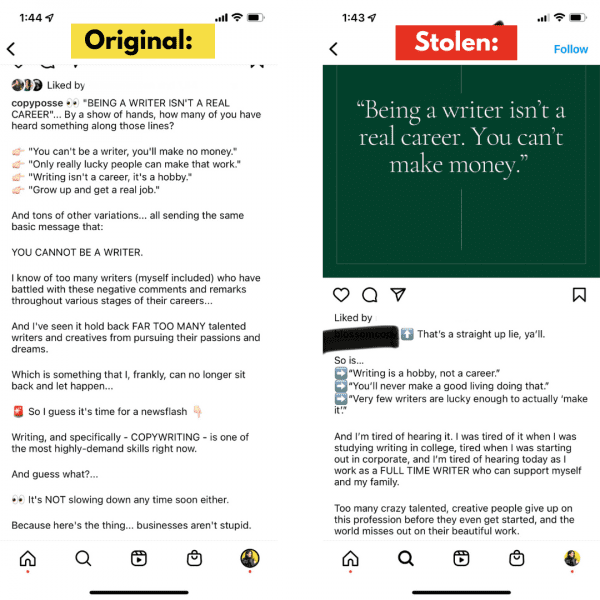 Again this post was created less than a week after my original post on common copywriter misconceptions.

C’mon are you kidding me?

She even formatted the caption almost the exact same. If you ask me, she took WAY more than just creative inspiration for this post. She reworded my exact caption and literally added nothing new.

So while this form of plagiarism might be a bit more blurry… it’s still textbook plagiarism.

Does anyone remember the copyright lawsuit that resulted from the iconic Hope poster used during Barack Obama’s 2008 presidential campaign?

The original photo, on the left, was a photo taken by a journalist for the AP. The iconic poster, on the right, was created by an artist – who initially tried to deny they had taken inspiration from that photo.

But the court ultimately ruled in favor of the journalist.

While the artist didn’t have to go to jail, they did have to agree to:

If this case teaches us anything, it’s that it’s always better to be safe rather than sorry.

So as a general rule – anytime you take creative inspiration from another source – always give credit to the original creator. Even if you’re not directly copying – or “swiping” – it.

I reference my mentors, coaches and fellow entrepreneurs in my content all the time. This is relationship building at its finest! When you give credit to those who inspire you, they’re more likely to trust you, communicate with you and maybe even work with you.

And if YOU see someone plagiarizing another creative’s work:

Always tag the original creator to bring it to their attention. ⁠

⁠Because the more we turn a blind eye, normalize, and accept this type of behavior… the more commonplace (and harder to fight) it will become.

Alright, Posse. That’s all I have for you today!

Alex Cattoni
Head word nerd and marketing mad scientist at the Copy Posse. I geek out on studying the intricacies of the human condition, including the hidden and fascinating motivations behind why we act, feel and buy the way we do.
Previous Post
REVEALED: 8 Unconventional Market Research Tips & Tools For Copywriters
Next Post
Digital Marketing Explained: What Is A Marketing Funnel & What Copywriters Need To Know