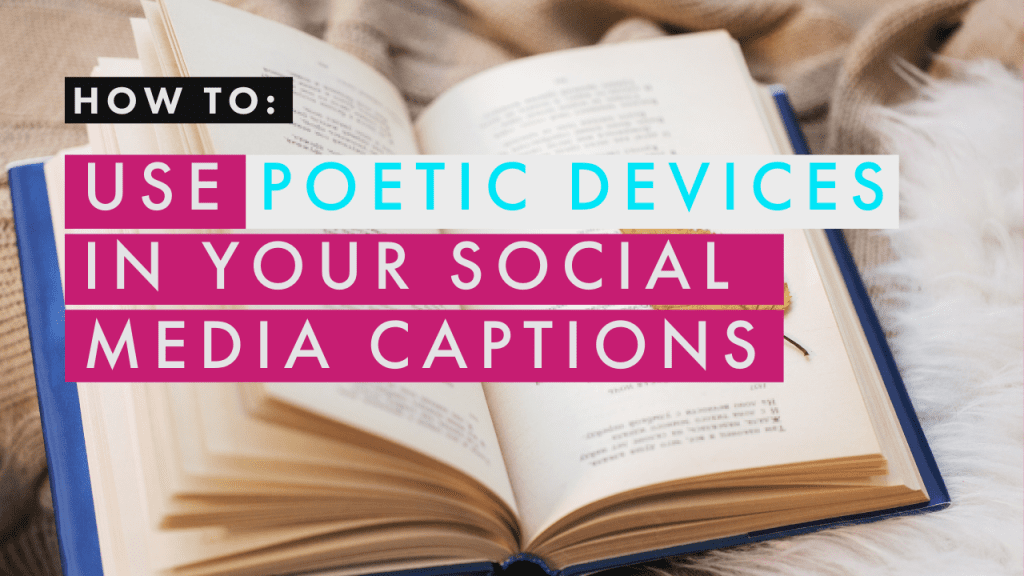 How Poetic Devices Can Improve Your Copywriting

If you’re not using poetic devices as part of your copywriting repertoire—you’re missing out! Today we’re going back to High School English class.

This week is a bit different, we’ve got a tutorial from another member of the Copy Posse: the other Victoria (or Tory)!

Yes, there are 2 of us with the same name on the team…

I work with Alex behind the scenes helping manage some of the daily operations and plenty of other tasks. Of course, I’m also a freelance writer with my own clients in various niches, and since Alex is enjoying her birthday week (woo!) I’m stepping in with a quick lesson on poetic devices for you!

Now, let’s dive right into it!

Despite being a writer, I don’t actually like writing about writing. Why? Because a lot of it’s already been said!

Beyond that, I don’t believe in giving advice unless it’s specific and practical. A lot of generic tips are out there on writing well without providing clear guidance. Today’s topic is something that I don’t see a lot of copywriters talk about, which brings us to today’s tutorial.

We’re going back to your high school English class to talk about poetic devices.

That’s right, I was a poet long before I was a copywriter. It might sound strange, but my poetic background has helped me become a much stronger writer than I would be otherwise!

What are Poetic Devices?

Also called literary devices, poetic devices are various tools commonly found in poetry that evoke emotions and meaning. They use sound, imagery, and different types of language to affect the flow and experience of a poem. You’ll probably recognize a few, but there are some obscure ones that not everyone knows.

This is the first thing I think we all need to know more about. Concrete language occurs when words refer to specific items that exist in the world. There are visual, tangible, and real. For example, chocolate-covered almonds are a tasty snack, and when I mention them you can probably picture them in your mind. I can elicit the taste, texture, and smell with just a few words.

Abstract language occurs when words refer to ideas and concepts that you can’t physically grasp. They are vague, intangible, and difficult to imagine. For example, love is an abstract concept. While your mind might conjure up things that represent love to you, those are different to everyone.

So, how does that apply to copywriting?

Who knew poetry could be practical?

Let’s see some more examples of poetic devices and how to use them.

Though it’s hard to spell, it’s a simple concept. An onomatopoeia is a word that refers to a sound made by a person, animal, or even an object. Comic books use them a ton to catch your eye.

These words can be used to create emphasis and really bring in your readers’ attention. While they’re powerful, don’t get carried away or you risk alienating your audience or coming across as tacky. I personally love sound effects, but not everyone is like me.

Another poetic device is enjambment, which refers to when a sentence starts on one line and continues into the next line. The word is French in origin and means “to stride over” or “go beyond.” Line breaks are a huge part of copywriting!

Here’s an example of a fake Instagram post I made for my new flower shop. Let’s imagine the brand is making an ad targeting new moms and dads with a newborn or infant.

While in poetry you might choose to do one or the other because you have your own goals, in an ad, that’s not ideal. If it’s too jarring, try playing with the line break to make it flow more naturally.

Also, in case you don’t know, “Baby’s Breath” is the name of the flower in the image, so there’s actually another poetic device going on! If you haven’t noticed it already, it’s…

Since we just had a pun in the last example, it’s only natural I talk about it! If you don’t know already, a pun is a play on words that occurs when a word has multiple meanings or sounds like another word. You may even change the spelling or use the wrong word to emphasize the joke.

If you’re writing for a brand that wants to appeal to an audience’s sense of humour, then writing puns is a good idea! NASA’s Curiosity Rover does this well in their social media post from 5 years ago:

How do we apply this to copywriting? Easy! Here’s is a great example of an image on the Twitter account for Soda Stream.

They’re connecting different cocktails to the astrological signs in a visual metaphor.

Plot twist: You can use poetic devices without even using words!

These are all a type of poetic device called “sonic devices” which means that they play with sound. I love littering little treats like these in my writing. In fact, I used one just now, did you catch it?

Alliterations occur when 2 or more words start with the same consonant.

Here’s an example of an Instagram post from a BC Winery with an alliteration in their caption! It’s hard to beat a day of Syrah, sunshine, and blue skies after all.

An assonance happens when you have the same vowel sounds in the middle of the word for 2 or more words in a row.

Here’s an example of a product called Shape Tape by Tarte cosmetics. The product name has an assonance with the recurring /a/ sound and it even rhymes. If they wanted to REALLY add some poetic flair they could do a giveaway campaign with a slogan like “Escape with Shape Tape.”

Lastly, a consonance occurs when 2 or more words have the same vowel sounds in the middle. A common saying to demonstrate this is “Pitter Patter, what’s the matter?”

Once again, you can easily identify this in social media captions like this one from Etsy’s Instagram page. The /s/ sound repeats itself in the words confession, obsessed, and even accessories.

If you’re looking for ways to add some creative flair to your copywriting, using poetic devices is a great starting point!

Obviously, you should always keep your audience in mind, but there are plenty of practical uses for poetry in the real world. Hopefully, this little poet opens your eyes to the wonderful world of poetry and how to use it to write some spicier social media captions!

That’s all from me! ~Tory