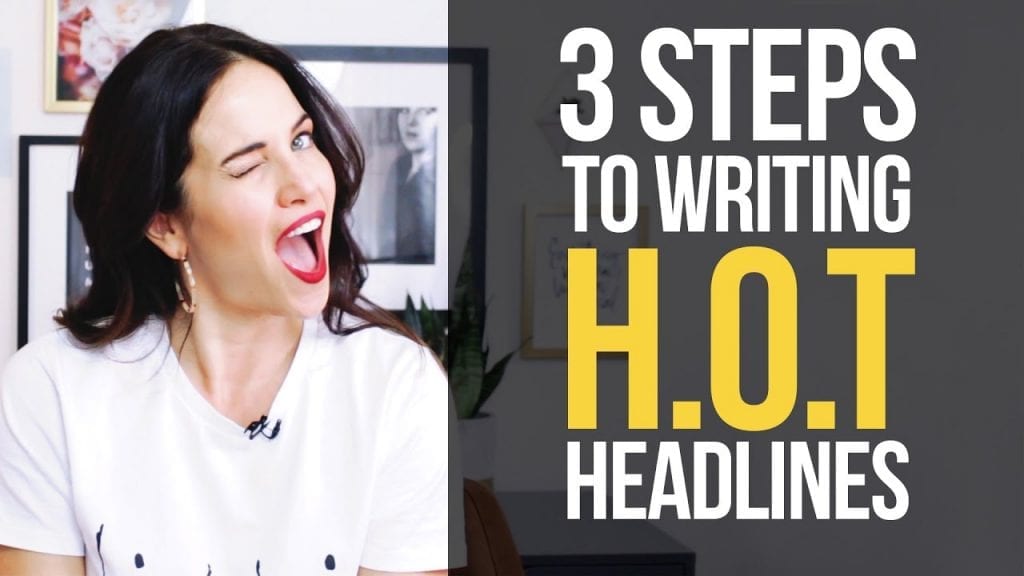 How To Write Sales Copy: 3 Tips For Writing H.O.T. Headlines

Today I’m going to walk you through my super simple 3 step formula to writing hot headlines.

So, what are headlines? They are strategically-written attention-grabbing statements used in marketing and copywriting with the sole purpose of getting your reader to engage with you. Whether it be to click an ad on Facebook or to continue reading a sales offer or, yes, even picking up that magazine in the checkout line at the grocery store.

Now, I’m not talking about “click bait”, for those of you using click bait in your marketing, seriously stop it, you’re lame, you’re ruining the internet for the rest of us. If you don’t know what click bait is, it is similar to the headlines I’m talking about except in this case they are written for the sole purpose of getting a click and don’t add any value whatsoever. What I’m talking about is writing effective headlines for your valuable content. Content that adds educational value, entertainment value, or inspirational value.

Now, ironically, even though headlines are the very first thing that your customer will read, as a copywriter they are actually the very last thing you should be writing. That’s because they are the single most effective and important part of any sales message. Whether it be a blog post, a Facebook ad, or sales offer, your headlines decide who stays and who goes, who clicks and who keeps scrolling. Your headlines need to be precise, personalized, and provoking, and often the shorter they are, the harder they are to write. As I like to say, the right phrase pays so really take the time to get this right.

Now of course headlines aren’t the only part of an effective sales message, so if you’re considering starting your own copywriting business, or if you want to use copy to scale your business, make sure to hit subscribe on my YouTube channel because coming down the pipe will be plenty more videos on copywriting basics and more.

So tell me if this has happened to you, you’re on Facebook or Instagram, you’re checking out your friends stuff you’re clicking around and next thing you know you’ve gone so far down the rabbit hole and you end up on one of those listicle sites like Buzzfeed or BoredPanda and next thing you know you’re reading a blog post entitled “17 Questions I Have For People Who Like Cilantro.” Yeah well that happened to me this morning, and I know I can’t be the only one, if this has happened to you, comment below!

I know the rabbit hole is deep and a lot of us get trapped down there frequently. If this has ever happened to you, chances are you have fallen prey to a killer headline. Now as a marketer or business owner, just think of the possibilities of what you could do if your website was able to garner that many clicks.

Lucky for you the formula for writing a hot headline is simple enough and with practice I promise it will become second nature to you as a copywriter.

Now websites like Cosmopolitan, Buzzfeed, and Bored Panda are absolutely killing the headline game. So if you want some inspiration, just scroll through those sites and see what kind of headlines they’re writing. I have a favorite tool called BuzzSumo that I use for checking the most popular headlines trending on any given topic. It’s something that I use every single day just to see what’s hot and what’s culturally relevant today.

Here’s my 3 step formula for writing a hot headline.

So in copywriting and marketing a hook is any concept or idea that grabs the users attention, it often provokes an emotion or promises some sort of benefit. Common emotions that drive clicks would be fear, joy, the classic us VS them, or the fear of missing out. I read a study recently that blew my mind. It was written by Chris Tolles who is the CEO of Topix, an entertainment company. He developed a strategy where he was able to drive 20-30 BILLION page views to his website by creating content that played off of only 4 human emotions. He only has 6 full time writers.

He describes those 4 emotions as history or nostalgia, humour, and then the fourth one is called schadenfreude. Now if you don’t know what schadenfreude is, neither did I, I had to Google it. It’s actually a German word that means pleasure derived from other people’s misfortune. So suddenly sites like Dog Shaming and F My Life make so much more sense.

So in marketing an open loop is any concept or idea which actually forces the brain to seek out some sort of conclusion. So if you were writing a headline that opened a loop, the following content should then close that loop. It peaks curiosity and one can not help but click or continue reading in order to close that loop that’s been opened in their brain.

So one of the most common ways to do this and to create an open loop in a headline is through specificity. So I’m sure you’ve seen this all over websites like Buzzfeed and Bored Panda because they use this so well. They’ll include numbers in their headlines because people love learning in sets, if people know there is 5 steps or 4 tips or 1 technique you must learn, it’s going to naturally increase their odds that they’re going to click on that headline. And like I said, scroll through Buzzfeed you will see a million headlines written like this, and its brilliant they’ve done it so well. Now of course you don’t have to use a number in a headline to create an open loop-it’s just one of the simplest ways to do it. You can also just be very good at storytelling so for example I read a headline the other day that said, “Gisele Bundchen finally opens up about why her and Leo broke up.” So you know that’s a typical sort of tabloid-y type of headline but you can see why it creates that open loop, it obviously implies that by clicking that headline, you’re going to find out what she said.

Step 3: Speak To Your Target Audience

So a really effective headline will always call out the reader, either by using the word “you” or by play off the readers sense of belonging or identity. So I read a headline the other day, 20 trivia questions that separate millenials from gen Zers. That headline is brilliant because obviously it speaks to those two groups, and everyone loves learning about their favorite topic, themselves. This is exactly why quizzes and personality type tests and all of that do so well no matter how ridiculous they are. You want to know what Hogwarts house you belong to or what magical fairy you are. So make it clear who you are speaking to. Remember if you try to appeal to everyone, you appeal to no one.

So now can you see why I was so hooked on the cilantro headline? It checked all of the boxes, it had a clear us VS them hook, I’ve heard somewhere that you either love cilantro or you hate it, so no matter what group you fall into those are two extremely powerful emotions that are going to get clicks. Two, it had specificity, 17 questions, even though every single question was basically a version of, “why are you crazy? Why do you like cilantro?” I still had to know what they were. And then number three it had a target audience. So this was such a brilliant headline because if it simultaneously spoke to everyone but also was extremely self identifying because you’re either in one group or the other. Which makes me wonder, which group are you in? I personally love cilantro, and think that people who don’t like cilantro are kind of nuts. But comment below and let me know which side you fall on, cuz this is a big deal!

So get to work writing those hot headlines and if you found this helpful please share and leave a comment below, and be sure to check back soon for more on copywriting, marketing, branding, and more.

Till then, Ciao for now!

Alex Cattoni
Head word nerd and marketing mad scientist at the Copy Posse. I geek out on studying the intricacies of the human condition, including the hidden and fascinating motivations behind why we act, feel and buy the way we do.
Previous Post
Become A Copywriter: Top 5 Best Copywriting Books For Beginners
Next Post
How To Get More Clients As A Freelance Writer (4 Copywriting Tips For Beginners)