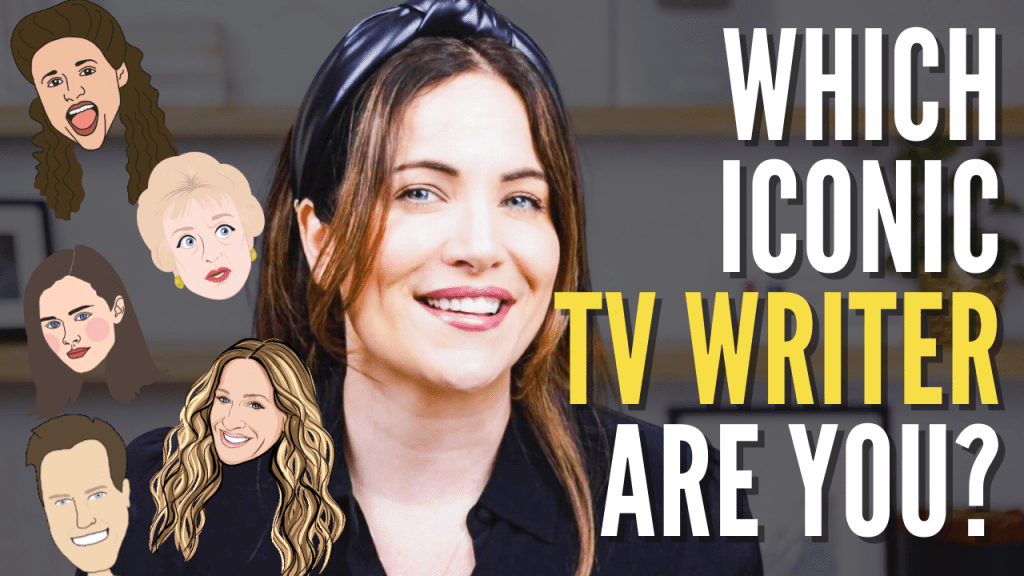 Which of These Iconic TV Characters Secretly Inspired Your Love For Writing?

Last Updated: 9 months ago
No Comments

Since the very first television show broadcasted in 1928, it’s safe to say that fictional TV characters have been highly influential in shaping our real lives…

Impacting everything from the way we dress to the cities we live in, to…

The career we choose?

In this blog, I’m going to cover some of TVs most iconic fictional characters that just may have inspired your career as a writer.

If you’re new to the crew – welcome!

Here on my blog you’ll find tons of in-depth tutorials, copy critiques, practical tips and exercises you can use to ignite your online business…

With some just-for-fun videos, like this one, thrown in for good measure 😉

Now I am SO excited for this video because a TV character really did inspire my writing career, and I didn’t even know it!

Well – not until much, much later in my life – that is.

If you wanna find out where my personal career inspo came from, then you’ll have to stick around until the end of this video – because I saved the best one for last…

Now the thing about our favorite characters – whether they’re from TV shows, movies, or books – is that they tend to leave lasting impressions on us on a subconscious level.

In fact, psychologists have studied this phenomenon and have discovered that while reading a book or watching a story, people are prone to subconsciously adopt their behavior, thoughts, beliefs and internal responses to that of fictional characters as if they were their own.

When we’re enthralled with a character and their life, we’re able to see glimpses of a career, lifestyle or even personality traits that we admire and model

So even fictional TV characters can expand our horizons, show us what’s possible, and most importantly – provide us with an outlet to dream, imagine, and plan out what we want for our own lives.

Now before we get into the list, I want to pay honorable mention to two iconic TV characters that didn’t make this list. Because, well – most people didn’t even know they were writers…

But they are SO iconic that I couldn’t NOT give them an honorable mention.

Chandler Bing from FRIENDS and Elaine from Seinfeld were both copywriters at one point during the sitcom shows.

Yep – seriously! How cool is that?

Alright now, lets countdown the 11 iconic tv characters that just may have secretly inspired your love for writing…

A show that probably every copywriter has seen, or is at least familiar with…

Now of course one could argue that this entire show sparked a generation of creatives who became interested in writing ads and selling products. But we really should highlight one character in particular… Ken Cosgrove.

Ken stands out from the other characters on the show, because he loves writing so much that he’s an Ad Account Exec by day…

And a sci-fi writer by night.

When his bosses at the advertising firm object to his habit, he starts writing under the pseudonyms “Ben Hargrove” and “Dave Algonquin.”

Now that’s a man who loves to write!

Well before True Crime Podcasts captured the attention of history buffs and armchair detective… there was Jessica Fletcher in Murder, She Wrote.

Yeah – she gave all of us wannabe novelists hope that you’re never too old to pursue your dreams — or live a tantalizing life of mystery.

All my millennial writers who grew up in the early 2000s probably looked up to this character at one point or another.

Rory Gilmore was the perfect grade-getting, book obsessed, coffee-loving journalist who could “take an assignment about the repaving of the school parking lot and turn it into ‘a bittersweet piece on how everybody and everything eventually becomes obsolete’.” in the words of her teacher.

She gave all of us hopeless word-nerds that being nerdy and loving words was actually a good thing that *gasp* not everyone thought was a “meaningless career choice”.

Hannah Horvath from Girls was one of those TV characters that you couldn’t help but love.

Her relentless love and pursuit of writing definitely showed us that if you’re passionate enough about something – if you keep practicing and you never you give up – you can find success in both small and big ways.

Alright here’s one that most hardworking writers could identify with…

In fact, some might argue that she perfectly represented how most overworked corporate writers feel, think and behave.

She was sassy, bold, and anything but cliché.

#6 – Lois Lane – Lois and Clark: The New Adventures of Superman

I mean… who didn’t look up to – and secretly idolize –  this award-winning reporter for the major Metropolitan newspaper who just happened to be married to Superman?

Lois Lane was a woman working in a man’s world – she was dedicated to uncovering the truth, discovering new things, and most importantly… telling a damn good story!

Setting the ridiculous title and outlandish plot aside…

Jane has dreams of being a successful writer – throughout the series, you watch her struggle with feelings of self-doubt and fear of failure (feelings that all writers are all too familiar with).

But in the end, you watch as she makes her dreams come true – even publishing her own novel.

I mean come on, how many comedy writers did The Dick Van Dyke Show inspire?!

Dick Van Dyke played the main character – Rob Petrie – who was the head writer for a successful TV comedy show.

But like all writers… What he REALLY wanted to do was – you guessed it, write a novel.

Who remembers this 90s show?

Khadijah James was a young writer trying to make it big in the world.

And I mean she had like – the best job ever. Owner and Editor-in-chief of a magazine, meeting celebrities, and attending fancy events?

What young writer doesn’t dream of that?!​​

She was an icon to us wannabe writers because she showed us that hustle and dedication really do pay off.

You know I wasn’t going to talk about Mad Men without mentioning the one and only – Peggy Olson!

Peggy showed us what talent, hard work, and speaking your truth can do…

The character who single handledly inspired my own love of writing and planted the idea in my brain that I could work from home on my LAPTOP and GET PAID FOR IT.

Now admittedly, when I look back on this series now, I see it for what it was…

An unrealistic portrayal of a journalist’s life in the big apple. I mean come on, living in that apartment, buying those shoes, and having that closet with a once-a-week sex column? Probably not very realistic…

But before I knew any better – watching Carrie live her lavish lifestyle in NYC was the stuff my dreams were made of.

And I’m sure I’m not the only one!

Now it goes without saying that there were (and are) TONS of other TV characters who have inspired and influenced generations of writers.

So I’m curious… who was your biggest TV inspiration? Let me know in the comments below.

And until next week, I’m Alex – ciao for now!

Alex Cattoni
Head word nerd and marketing mad scientist at the Copy Posse. I geek out on studying the intricacies of the human condition, including the hidden and fascinating motivations behind why we act, feel and buy the way we do.
Previous Post
Digital Marketing Explained: What Is A Marketing Funnel & What Copywriters Need To Know
Next Post
Next-Level Copywriting Secrets: How To Reverse-Engineer Anticipation & Excitement (Interview with Shawn Twing)