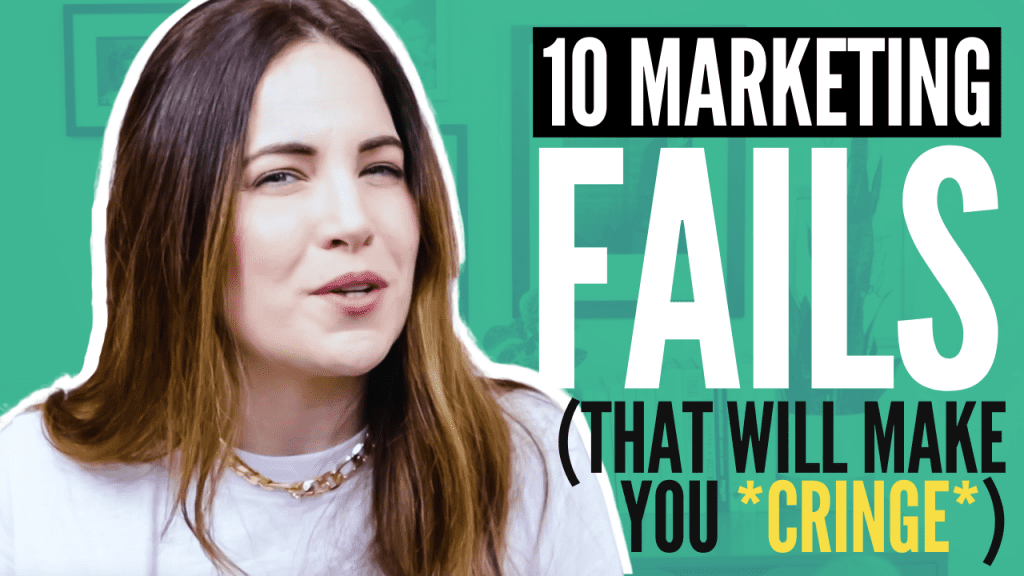 Everything from tone deaf racism to poor-shaming… sex-trafficking to virus spreading… There were some very inappropriate ads that ran in 2020. Some of these brands fessed up, and others are sticking to their guns. But one thing is for sure, they were all HUGE marketing fails.

A brand without trust won’t get far these days, and I’ve said it time and time again that it’s not enough to just sell a good product anymore…

People want to buy good products, from good people, who share their morals, beliefs, and values.

They want to buy from brands they TRUST.

Once a brand loses the trust of its customers… they’re unlikely to EVER win that customer back again. There’s too much competition out there, so if one brand doesn’t align with its customers’ values, they’ll just take their business (and money) to a one that DOES…

Just ask these 10 brands that faced some serious heat in 2020, thanks to their major marketing fails…

And in this week’s post, I’ll be talking about 10 marketing strategies that were totally face-palm-worthy in 2020… and yes, I’ll just tell you right now. One of them DOES involve “a Karen”.

Now, whether your name is Karen, Bob, Billy, Sue, Sally, or anything in between… be sure to leave me a comment below to let me know you’re here!

And if you’re new to the crew… welcome!

I put out a new video over on my YouTube Channel every week… so if you want to learn more about the hottest copywriting, marketing, and branding techniques that are working TODAY be sure to subscribe.

Okay, let’s get started with my list of major marketing fails in 2020 (heads up – these are SERIOUSLY CRINGEY) and will definitely make you feel uncomfortable… which is why we should talk about it.

What started as a well-meaning marketing attempt to promote their beloved Mac ‘n’ Cheese product on National Noodle Day… quickly spiraled out of control when Kraft launched this marketing campaign, urging people to “Send Noods” to their loved ones during the pandemic, to provide comfort and make them smile.

The campaign quickly received tons of negative feedback and backlash from the public. Many people calling Kraft’s attempt at a “funny” marketing campaign wildly inappropriate, considering the fact that their main target audience is – you know – children.

Some critics even accused the company of promoting child sex-trafficking and exploiting children to sexual suggestions and innuendos.

Yikes. Not the type of PR Kraft was looking for. They promptly removed the content from all of their channels.

The Black Lives Matter movement blew up to huge proportions in 2020, and rightfully so. After countless unjust murders of black citizens and literally centuries of systemic racism in the U.S. and other places all over the world, thousands of protestors took to the streets to fight for equality and justice

And naturally, many businesses and brands shifted their marketing to show their support, and stand in solidarity with the movement and all it entails. Which is great… except when this marketing is NOT a genuine reflection of the brand’s values or viewpoints.

L’Oréal Paris was one of many brands that received public backlash for its seemingly inauthentic statement regarding the movement.

In 2017 L’Oréal Paris ended its contract with its first-ever transgender ambassador after she spoke out about racism and white supremacy… claiming that her statements were “at odds” with the brand’s values.

Naturally, the black community was quick to call out the makeup company on their blatant gaslighting and fake attempt to stay relevant.

I feel like I shouldn’t have to say this… but “jumping on the bandwagon” is not good marketing. If your brand doesn’t genuinely support the values and ideals of a particular movement or cause, then it should not claim that it does without taking some SERIOUS action to back it up.

Performative marketing is just not cool.

This U.S. supermarket chain ran a full-page ad encouraging people to host gatherings for the Holidays, and even *gasp* share food!

Their advertisement, which featured a platter of classic “finger foods” such as shrimp, fruit, and cheese, also read “Hosting? Plan a Super Spread”…

Hmmm… probably not the best message to send out in the middle of a global pandemic.

Giant Foods later apologized for the insensitivity of their Advertisement, stating they realized that, in hindsight, it probably wasn’t the best choice of words.

After the murder of George Floyd sparked social justice movements all over the world, many brands began the long-overdue process of re-branding their racist logos or marketing campaigns… companies like Quaker Oats with Aunt Jemima, and Uncle Ben’s Mrs. Butterworth’s…


But one of the more appalling re-brands that the public demanded was Colgate’s “Black Person Toothpaste” brand, Darlie, one of Asia’s best-selling toothpaste brands

Founded in 1933, the toothpaste brand was initially named “Darkie”. Its original logo was a man in Blackface wearing a top hat and tuxedo while showing off his shiny white teeth with a big smile…

The brand has been criticized for its racist mascot for decades and has only made minor tweaks over the years… such as changing the name from Darkie to Darlie, and changing the face of the man in the logo to be more “racially ambiguous”…

Now Colgate is being criticized for “dragging its feet” after it claimed it would be “reviewing and evolving” the brand back in June.

It’s brands like this that really make me wonder… HOW do you even exist? I mean some brands should just be straight-up eliminated immediately.

What happens when your advertisement builds off people’s biggest hopes, BUT it’s also extremely misleading?…

Well just ask the Safety Warehouse, who publicly advertised “New Zealand’s first-ever mass cash drop”, with the vague promise of $100,000 “in value” would be falling from the sky…

People showed up in mass numbers for the event, but when the cash drop began, and people realized that the money falling from the sky wasn’t real, but instead fake cash and $500 vouchers… a riot quickly began.

The Safety Warehouse stands behind its marketing, stating that “real money was given out” at the event. However many other people think their marketing strategy was dishonest and distasteful, playing on the hopes and dreams of people who needed money the most.

Definitely not very good marketing, especially during a global economic crisis when hundreds of thousands of people are struggling to find jobs or make ends meet. Not cool.

However, the brand failed to address how it’s product (*ahem* a whitening cream) contributes to the issue of racism in the first place…  and it continues to push the same product under the revised brand name.

Someone should’ve told them that changing the name of their product doesn’t mean shit, if the product is STILL rooted in racism.

Now here’s another example of a completely well-meaning marketing attempt, that just read the room very, very badly… and as a result, ended up offending a lot of people and coming off as insensitive and unaware.

Aldi grocery store teamed up with a popular social media influencer and created the #AldiPooresetDayChallenge. With the idea that January 24th is referred to as the poorest day of the year, because of all that post-holiday spending.

The influencer was “challenged” to feed her family of four on a budget of $32/week, shopping exclusively at Aldi and showing her grocery hauls and meals to her following.

Although Aldi had good intentions of demonstrating how far the dollar could be stretched in its stores, the challenge left a bad taste in the mouths of many people… coming off as insensitive to the families that were barely scraping by, and on budgets much smaller than $32/week.

Many felt as though the store was making a game out of people’s real-life struggles and hard-ships.

Now, this might be one of the most face-palm worthy marketing fails of the year… and in a MASSIVE company like Volkswagen, it really makes you wonder who the hell is approving these things?

This German Volkswagen video ad was promoting their new car, Golf 8. It showed an GIANT white hand pushing a black bystander away from a parked Golf, before flicking him into a restaurant called Petit Colon, which translates from French to the Little Colonist.

After the ad caused a massive uprise on social media, the ad was removed and Volkswagen issued an apology for the ad…

“No one from the team realized that flicking away a person is inappropriate on its own — and racist in the context shown. We should never have made a mistake like that. Neither the agencies nor we. We must apologize for that — with no ifs and buts. And ensure that something like it can never happen again.”

Volkswagon, which was founded in 1937 under the Nazi regime (and also used slave labor from concentration camps to build vehicles)… is now the largest car manufacturer in the world…

As I said, a company this big really should not be making such obviously offensive and racists ads like this one. Get it together.

Dominos “Calling All (Nice) Karen’s” ad ran simultaneously in New Zealand and Australia, stating that it’s a “tough time to be a Karen” and that if you were a nice, law-abiding, mask-wearing Karen – they wanted to give you a free pizza.

The ad was meant to be lighthearted, funny, and bring people together with pizza… and in Australia, that’s exactly what it did! The Aussie took no offense to the ad, and Dominos saw no backlash in that market.

However, in New Zealand, it was a different story entirely. People massively criticized Dominos for being tone-deaf in their marketing. Because “Karen” is typically associated with an over-privileged white woman, the idea of giving this person more free stuff, while ignoring the minorities and oppressed, was not an idea that New Zealand thought was very funny.

It really goes to show the importance of market research…

The New Zealand Dominos apologized for the ad, and removed it from their marketing.

Now Khloe isn’t the first high-profile celebrity that Big Pharma has paid to endorse their products… we’ve seen the same thing from numerous other celebrities in the U.S.

However, that doesn’t make it right. And people continue to raise concerns about the ethics of allowing high-profile stars to market medications directly to consumers…

In fact, this practice is so questionable that the United States is one of only a few countries in the world that allow this type of advertising.

The American Medical Association has previously called for a ban on the practice, claiming that it contributes to inflated healthcare costs and interferes with doctor-patient relationships…

And while you can’t claim that every celebrity that endorsed a drug has ill intentions, you also can’t deny the fact that they are NOT a medical professional and should NOT be the one “educating” or “influencing” the public on what drugs they should be taking.

Which fail was most cringey for you? Comment below and let me know.

Alex Cattoni
Head word nerd and marketing mad scientist at the Copy Posse. I geek out on studying the intricacies of the human condition, including the hidden and fascinating motivations behind why we act, feel and buy the way we do.
Previous Post
How Sam Made Over $16K In ONE Month From Freelance Copywriting (Only 8 Months After Starting)
Next Post
Is A Copywriting Course Really Worth It For Beginners?